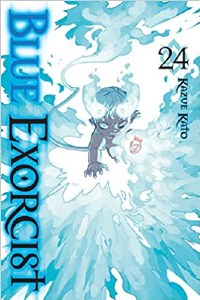 Eighteen hours have passed since Yuri’s labor began and she is no closer to delivery than she was when it started. Because of the cradle barrier, medical experts are unable to give her an injection, and she is exhausted.  Not to mention that during this ordeal, the poor woman is on display, and there’s nothing anyone (meaning Shiro) can do about it. He is helpless to help her. Yuri pushes hard and manages to birth the first child, which has its own consequences. Poor Rin, an unseen silent witness to the events of the past, becomes convinced more than ever that he should never have been born.

Sir Pheles feels Rin’s pain and removes him to another place.

Meanwhile, aboard the airship Dominus Liminus, Yukio has been summoned by the commander, Lucifer, who informs him that his test results are back. While Yukio is not a demon, he is not exactly a normal human either. Yukio’s left eye shows signs of severe temptaint, which is probably why Satan is able to use the eye as a window onto Assiah.

Lucifer decides to play tour guide and takes Yukio around his airship. A set of twin pistols catches Yukio’s eye. Turns out they are the test type and prototype of the Armumahel gun and its power “has the same qualities as the black flame” they consider to be “the flame of Gehenna.” In a surprise move, Lucifer offers the guns to Yukio and he accepts.  However, Lucifer explains, before Yukio can wield both weapons, his arm needs to be repaired, which could take five or six weeks. But there is a way in which it could be done in only one day…

Lewin Light (aka Lightning) is on trial for his attack on Director Drac Dragelescu. Lightning attempts to tell them (including Arthur Angel) that Drac has been working for the enemy, working at producing clones of demons. That doesn’t go very well, so now it’s up to Suguro to find the proof of Lightning’s innocence. Is he up to the task?

Shima gives Yukio some confidential information and tells him to do with it what he will. Yukio can’t help but wonder which side Shima is on. Shima says he wonders the same thing about Yukio. But what Shima tells him about Lucifer constantly changing bodies makes sense and explains much. Also explains much about Dragulescu.

The evidence of Dragulescu’s perfidy comes a day late and a dollar short as the man has flown the coop. Meanwhile, Lucifer has allowed Yukio to witness the experiment involving so-called “chosen ones” for whom this is not their first time at the rodeo. And now Lucifer reveals the reason for wanting Yukio to be present at this time…

Shiemi finds herself among the Grigori as an honored guest and given a complete make-over. They refer to her as Lady Shiemi and her wish is their command. She is unsure of why she is there. And she makes an unexpected discovery…

I’ve been waiting a long time for this next volume, and it doesn’t disappoint. On the contrary, I am now impatient for the next one. I only hope the wait is shorter.

Rin is beginning to think he should never have been born, as if his birth was the cause of anything. I hope he gets over this soon. Yukio, on the other hand, has come back into my good graces. I should have known better. The jury is still out on Shima. Suguro is pretty awesome, and has been trained well by Lightning, who isn’t as useless as he often seems. Even Mephisto Pheles shows an uncanny knack for knowing where and when he is needed and what to do in any given situation.

I still feel bad for Yuri. She was used as a pawn for something that was none of her fault. The heart loves where it loves. Not enough Shiro in this volume, but that’s not unexpected. Important things are happening, I can’t wait to see what they are. Another great volume of Blue Exorcist! 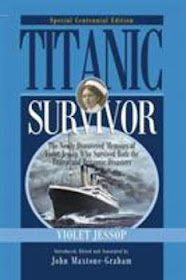