Book Review: Felix Ever After by Kacen Callender 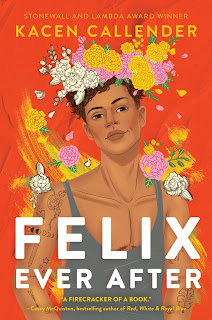 To say Felix Love’s life is complicated would be an understatement. He lives with his father in Harlem, his mother having walked out on them years before to start a new family. His father has sacrificed a lot to provide for Felix, including his tuition at St. Catherine’s and the summer arts program, as well as his top surgery—Felix is transgendered. While his father is supportive of that, for some reason he finds it difficult to use Felix’s name, and often just calls him kid.

Felix’s best friend for years is Ezra. The two of them are thick as thieves and do everything together. Ezra comes from privilege. His parents have bought him his own apartment, and Felix often sleeps over there. One day, Felix’s world is shattered when he walks through the gallery at school only to find photos of his old self hanging there, framed and displayed for everyone to see, as well as his dead name. Felix is beyond mortified as the faithful Ezra removes the evidence of someone’s dastardly deed. Who could be so cruel, and why?

Felix is working hard on his art, wanting to be accepted at the prestigious Brown University, hopefully on a full scholarship. Those are far and few between, and another student at St. Cat’s, a guy named Declan who once dated Ezra, is also planning to go there and snag the full ride too. Felix doesn’t think it’s fair because Declan comes from money. Plus he’s obnoxious and full of himself.

Felix writes emails to his mother, but he never sends them. He hasn’t heard from her since he told her he was transgendered, years before. The emails sit in his draft folders... all 476 of them. Someday maybe he’ll actually hit send on all of them and flood her inbox. Felix can’t help but wonder why she doesn’t love him anymore?. And why can’t he find a special someone, as his peers have? Even Ezra is dating someone, a guy named Austin, and seems happy. Why can’t Felix find love? Is he so unloveable?

When Felix becomes convinced that Declan is responsible for the gallery fiasco, he determines to find out for sure—even if he has to catfish him to do it.

This book was recommended to me by my daughter, and I devoured it in like two days, it was so good. I loved Felix so much, and I ached for him as he questioned his life, his art, his identity… not unusual for a teen, but even harder for a trans teen. I think it’s great that we’re seeing more books with trans characters, someone other trans people can identify with. But even more so, I think books like this help other people come to an understanding of what it means to be trans. For many people, it’s a new and alien concept. Sure, trans people have always been around, but the discussion has never been so open as it is now. I think books like this one are important in gaining a better understanding of other people. Diversity is something to be celebrated, not feared. What a boring world if we all thought and did the same things and if we all looked alike.

I hope to see more from this talented author and highly recommend this book for anyone, especially romantics.