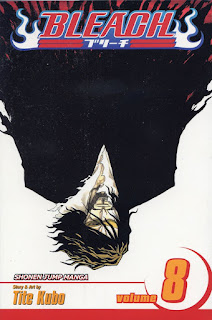 Kiskue Uruhara is training Ichigo so that he can go to the Soul Society and rescue Rukia before she is executed. But Kiskue’s tests are… well, something else. In fact, some might call them extreme. This one is called encroachment, where the chain Ichigo is attached to at the bottom of a deep hole begins to devour itself. If they get too close to Ichigo, they’ll devour him. If he doesn’t get out of that hole within seven days, he’ll become a Hollow and they’ll have to put him down!

Meanwhile, Mr. Yoruichi, the talking cat, is training Orihime and Chad to prepare them to accompany Ichigo to the Soul Society. But so far results haven’t been the best. The feline tells them to remember what was going on when their powers first manifested, who did they want to protect.

Jinta and Ururu think Ichigo is transforming and want to dispatch him, but Kiskue bids them to wait. Ichigo finds himself in a strange place with a strange man in black, who tries to get Ichigo to realize who he is. A figure is seen emerging from the shaft, but is it Ichigo or a Hollow?

For the third test, Kiskue tells Ichigo to knock his hat off. Sounds simple, but nothing is every truly easy where Mr. Hat-and-clogs is concerned!

Back in the Soul Society, Byakuya pronounces sentence on Rukia, who seems resigned to her fate.
Afterward, he is approached by two of the other captains—Gin Ichimaru of 3rd Squad and Kenpachi Zaraki of the 11th Squad. (An odd couple, indeed)

Ichigo is finding that it’s not as easy to knock off Kiskue’s hat as he imagined. Will Uruhara really kill him if he gets the chance? Or is that just a part of his training technique?

And where is Ishida? Why isn’t he training? Or does he really intend to stay out of this?

And what the heck is the Wall of Koryu, and just how dangerous is it?

This volume of Bleach is all about Ichigo and his companions preparing themselves to enter the Soul Society and rescue Rukia, a daunting task at best. There are so many questions that need to be answered! One advantage of reading the manga, even while watching the anime, is that the manga sometimes explains things I wondered about. Like how all these people stand around in the middle of the air as though they were on solid ground. Zangetsu explains to Ichigo that it is the reishi floating in the air that coalesces and allows the Soul Reapers to apparently stand on nothing. Good to know!
Kiskue Uruhara is a very strange and unusual character. The mysterious shop owner must have more to him than we can see, considering the powers he displays when training Ichigo. Who or what is he? Sorry, gotta wait for his backstory. Same with the talking cat.

With Bleach, never assume that what you see is what you get. Or that people are what they seem. I’ve been fooled by that before. More than once. This volume has a lot going on, but there are still questions.

How can Byakuya be so calm as to accept the execution of his sister? Why is she so resigned to such a fate? There has to be more to it than this. I believe, even when this situation is resolved, that the truth goes far deeper, and that even as far as I am in the anime, I don’t know everything. But I have my suspicions, which it’s too early to share. Let me just say that I believe everything happens for a reason and nothing is coincidence.

Another great volume of Bleach, looking forward to the next one!